For around our first month in Canada we have been mostly stationary (at least comparatively to… well, Canada). For those who missed it, we spent some glorious times exploring Vancouver, and paying visits to Whistler and Vancouver Island, as well as fixing up Cherry Tom for the road ahead.

Our road ahead specifically was this one: 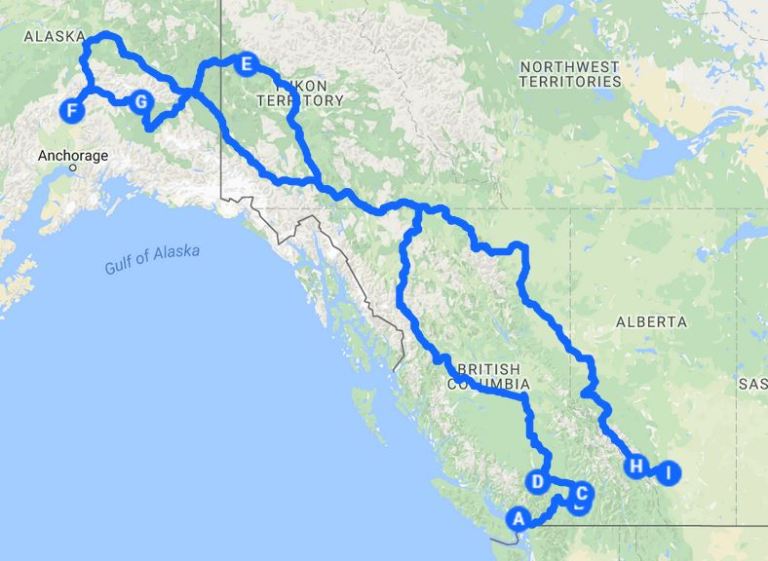 Along the way we planned not only to gape at British Columbia’s cornucopia of mountains, but also to follow the route of the 19th Century Gold prospectors. Not everything worked out as planned…

After our first post about our Canadian travels we were contacted by our friend Jack who recently moved to Kelowna. He read we wanted to do the Kelowna Parkrun and invited us to visit him and his girlfriend Angie. We arrived on Friday and had a lovely afternoon: delicious dinner, yummy local beers and a fun game of Settlers of Catan.

Bright and early on a Saturday we made our way across to Parkinson Recreation park, where we were greeted by hordes of Pickleball players: a sport neither of us had heard of until that day. Despite arriving in plenty of time we had to jog to the start line after getting lost and just made it for the start.

This was a special Parkrun for me: the 50th one I have done. It was in many respects a lovely course for it, but for the lingering smoke in the air and the heat…

Out and back along the park by the road I finally made it back through the pickleball crowds and home for my highest position finish yet, and a respectable time given the conditions although still a long way off my best. Aleks arrived soon after, despite a little accidental detour when running through the pickleballers which added on 20 seconds or so to her time.

Jack and Angie had plans to go climbing with their friend on Saturday and kindly invited David and me along. After we returned from Parkrun, had showers and breakfast the four of us headed to Ellison Provincial Park. The drive took around 45 minutes from Kelowna. The park is located on an edge of a picture perfect lake and has some granite rock features.

Angie climbed first, lead-climbing, and set up a top rope. We then took in turn climbing the route. This first climb was very fun and I managed to get to top, even though it’s been a very long time since I last climbed. We alternated climbing with swimming in the lake. The day was very hot and the water in the lake cool and refreshing.

Jack set up the second route with a top rope. This route was looked more challenging than the first when I watched Angie, Steven and David climb it. I gave it a go, but despite best effort I didn’t manage to make it to the top. Jack and Steven then had a go at climbing a third, even harder route, while the rest of us watched. The day was fantastic fun and went by really quickly. In the late afternoon we thanked Jack and Angie for a fantastic stay and we set on our way North while they headed back home to recuperate before another climbing session they planned for Sunday.

We read that Okanagan region was famous for its wines, so we decided to stop by a winery and sample some local produce. As it turned out we were a bit north of the usual wine growing region, but we did find ourselves on a newly established Kamloops Wine Trail. Out of the three vineyards on the trail we settled on Monte Creek Ranch winery. There we went on a tour of the vineyard and the winery and then had a tasting of 8 of their best wines. I really liked the Riesling, while David preferred the Hands Up white, named after a gangster from the region who robbed a train (rather unsuccessfully) and coined the famous phrase. We both enjoyed their very special, blueberry wine and we bought a bottle to take with us. We decided we’d definitely like to visit a few more wineries and try the British Columbia speciality ice wine. 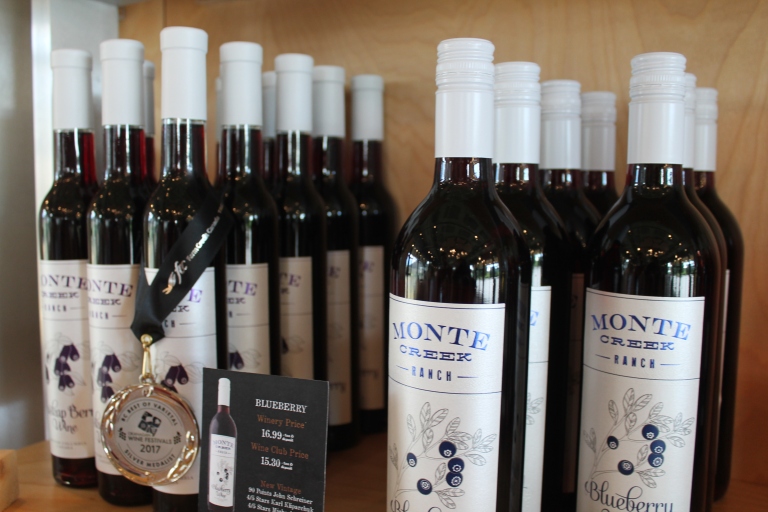 Leaving the winery we set Google maps for Lillooet, where we were set to begin the historic route along the old Cariboo Wagon Road – a.k.a the Gold Rush trail. Shortly past Kamloops however the sky began to take on a texture which would not look out of place over mount Doom, and it was not surprising when we were turned around and sent back. Listening on the radio we found out that the fires had spread significantly and that entire villages had been evacuated all over the central BC region.

Scrabbling for a plan, we decided to drive instead north and try to rejoin our route at Prince George. Unfortunately we were caught in the rush of other rerouted travellers and spent a tiring evening ringing campsites for spaces and being turned back again en-route to one. Finally we arrived exhausted and safe at Thompson River Provincial Park campsite.