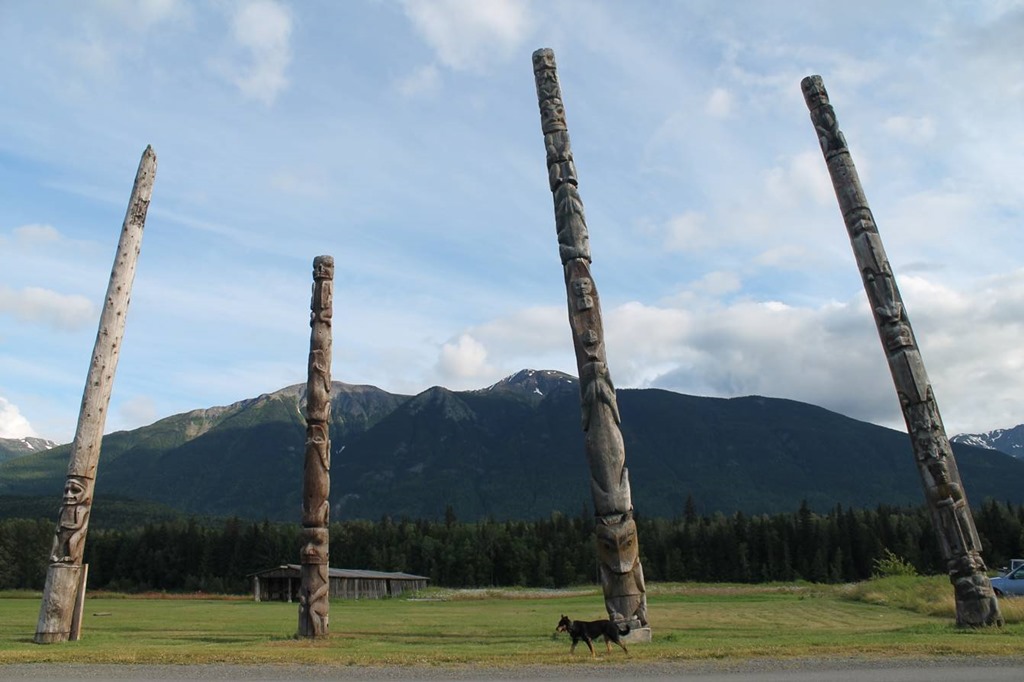 Hello faithful followers, thank you all for waiting so patiently. We know that unlike our last couple of trips we really haven’t contributed much from Canada. We have plans to reinvigorate the blog since it’s been very hard to find WiFi good enough to upload photos with since we’ve been in the Yukon, plus we’ve been busy with a few other things that we’ll tell you about later. We’ll be bringing you up to speed with where we’ve been and what we’ve been up to over the next few posts. First though, here is a short post about sights along the Stewart-Cassiar highway in northern BC written a few weeks ago, that never made it on to the site.

Historic sites of the First Nations
Despite leaving Ksan behind we still had a great deal of First Nations exploration to do. The first site on our route, the Gitwangak Battle Hill required a short walk downstairs:

This was at one point a settlement of the Carrier first nations and the stronghold of the legendary Nehl’xt who led his people to numerous victories with his club “strike only once”.
Not far away from the battle mound lies an interesting juxtaposition of cultures. On one side of the road a dilapidated wooden church. On the other a row of towering wooden poles. We wondered through the poles and watched a squirrel halfway up one taunt two dogs who were determined to stare their dinner down.
The next site at Gitanyow had an even bigger and more varied display of poles. Off the highway and with little in the way of explanation it felt as though this is the closest one can get to seeing poles as they would once have been used.

The next site at Gitanyow had an even bigger and more varied display of poles. Off the highway and with little in the way of explanation it felt as though this is the closest one can get to seeing poles as they would once have been used.

The Sat-nav told us Bear Left…
The drive between these sites turned out to be almost as exciting as seeing the huge poles. Between the two sets of poles we I caught our very first glimpse of a black bear, just hanging out by the side of the road. Less than an hour later I created a hill to see not just one bear, but a mother and cub crossing the road not 50 meters from us. About to set off again we were amazed to see another cub bound across the road, shortly followed by the third sibling. From never having seen a wild bear we managed five in one afternoon!

David had researched numerous recreational sites along our route, which permitted overnight camping. One of such sites was Bonus Lake. We arrived around 10pm to find the quaint, wooded little site of 3 picnic tables completely empty. We weren’t bothered. We parked up by the lake and got comfortable in the back of Cherry Tom. We decided to watch an episode or two of Fargo before sleeping. Tens of mosquitos decided it was a wonderful idea to join us. Their constant buzzing was hard to ignore and even DEET spray didn’t deter them. Around midnight we decided it was time to go to sleep. Alas no luck! The mosquitos and a wild Sasquatch successfully kept us from sleeping. Ok, so maybe not a Sasquatch, but some other big animal was definitely making noises in the trees by our car. We decided to jump out of the back of the car, still in our PJs and drive on. At 3am we arrived at Meziadin junction and satisfied a bear wouldn’t like to visit a petrol station frequented by trucks throughout the night we managed to catch few hours of sleep.
Salmon Glacier and a first glimpse of the States

Don’t tell Donald, but there’s a way to enter the States without ever showing your passport. We discovered this on a fun side-jaunt to see the magnificent Salmon Glacier. From Meziadin junction a 2 hour drive takes you to the town of Stewart, and from there a mainly gravel road winds briefly in and out of the Alaskan panhandle on the way up to the glacier. As until recently Aleks was not part of the privileged Visa Waiver Program club, this was her first visit to US soil, and surprisingly there isn’t even customs going in (there is coming back so it’s best not to forget the passport anyway).
Still in Alaska there is a bear viewing platform above a river, and here we might have been able to add Grizzlies to our bear count had we been a few days later – sadly the salmon hadn’t quite arrived yet so neither had the bears. Back on the Canadian side the road continued upwards to the most stunning outlook where we took countless photos of the views and also some friendly Gophers who popped up to say hello.

Entering Yukon
The top end of the highway doesn’t offer too much to stop and see, one of the few exceptions being Jade City where unexpectedly 80% of world’s jade is mined. Jade from here is shipped as far as China, where it’s in very high demand. We resisted buying a bucket full of jade off cuts for $20 and headed on.

At the Yukon border point we stopped for the requisite photographs and a spot of dinner – despite the late hour we were far enough north now for the days to be becoming noticeably long. From the border there was only another 2 hours to go until Watson Lake: our first destination in a new Canadian province.